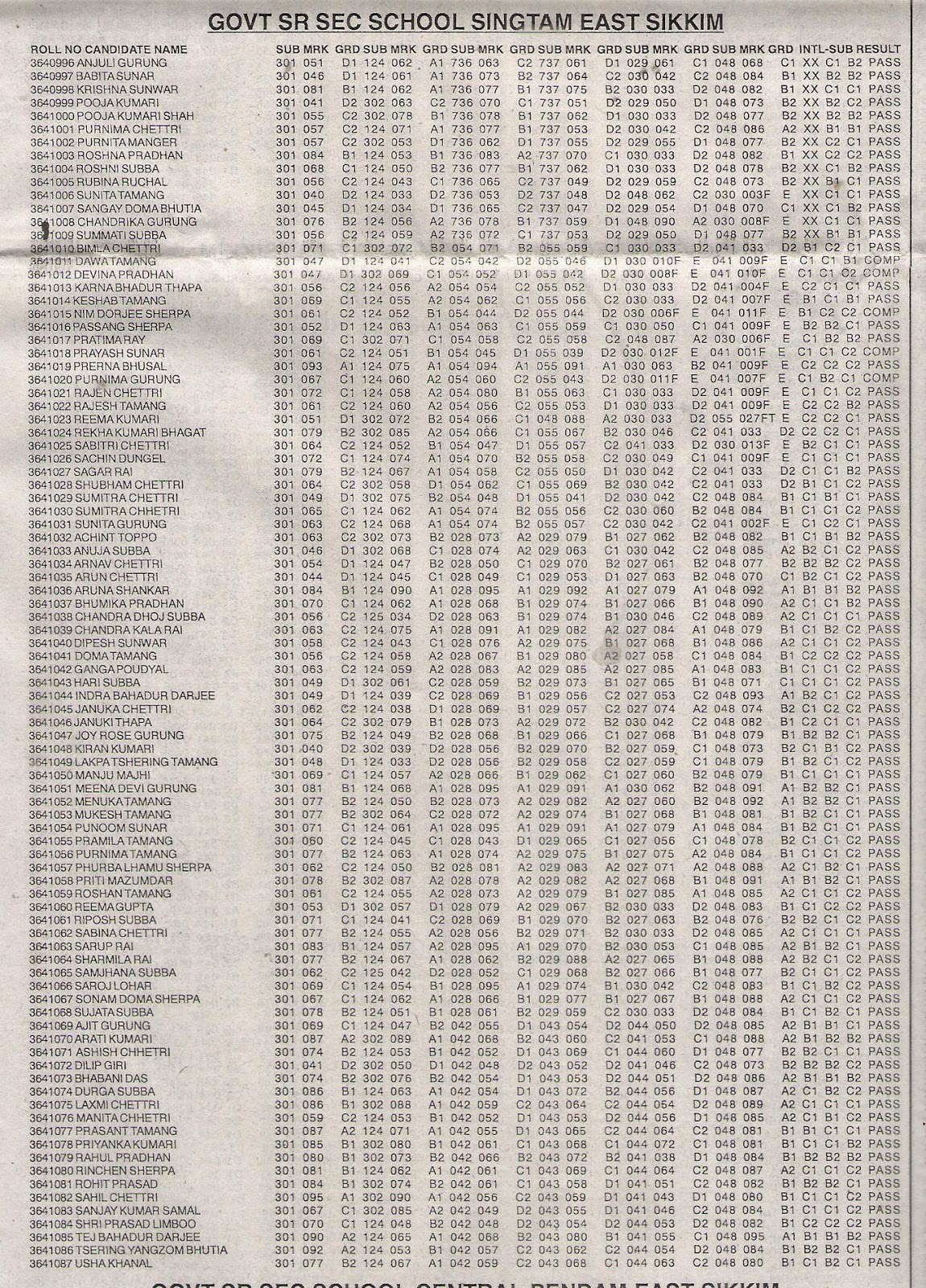 SOURCE: SAMAY DAINIK
at Thursday, May 29, 2014 No comments: Links to this post 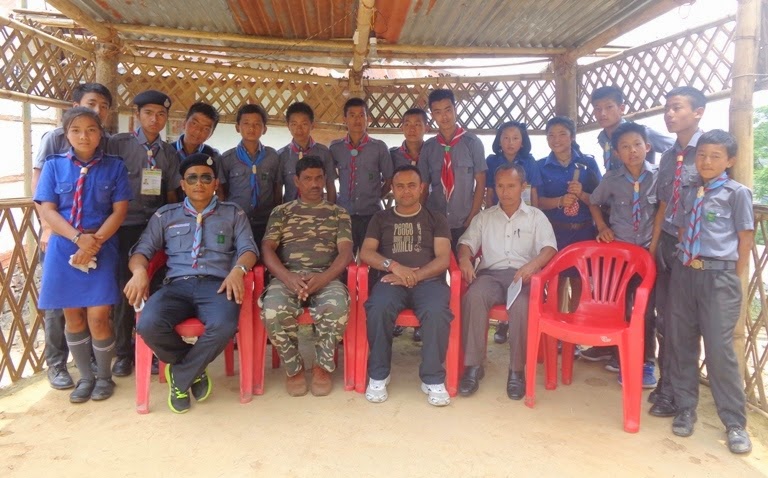 RONGLI, MAY 28: : In one of a rare initiative of the state, an awareness plantation of fruits and vegetables saplings in the reserve forest of Baklakha was organized by the Scouts & Guides Unit and Generous Students of Dalapchand SS on May 25. The awareness plantation was held in presence of Scout Master, School teachers, S.M.C, Panchyat (GPU, Dalapchand), members of local NGOs and guardians. 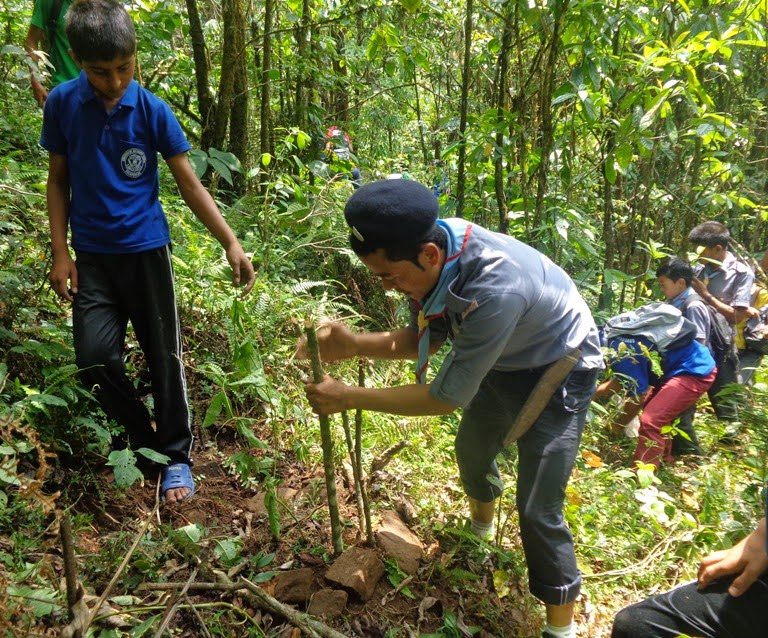 The press release reads, the idea was taken keeping in view the ongoing clash between wild animals and local people. The main objective was to provide sufficient food for animals in the forest such that they don’t have to invade the human’s habitation.
Around 70 students that included Scouts & Guides Unit and Generous Students of Dalapchand SS from class vi to x had participated in the awareness program. The program started at 10 am with brief highlight by SD Bhutia, GT (Bio) and Scout Master of Dalapchand SS about the day long program. Mani Kr.Rai. Panchayat Secretary (GPU, Dalapchand) also addressed the gathering was went on to say about the precautions to be taken in the jungle.
Locally found vegetables and fruits saplings were planted in the forest. The students also interacted with SSB In-charge who appreciated school's initiative towards such noble cause. He also assured any possible supports from their side in days to come. The program ended at around 3.30 pm. 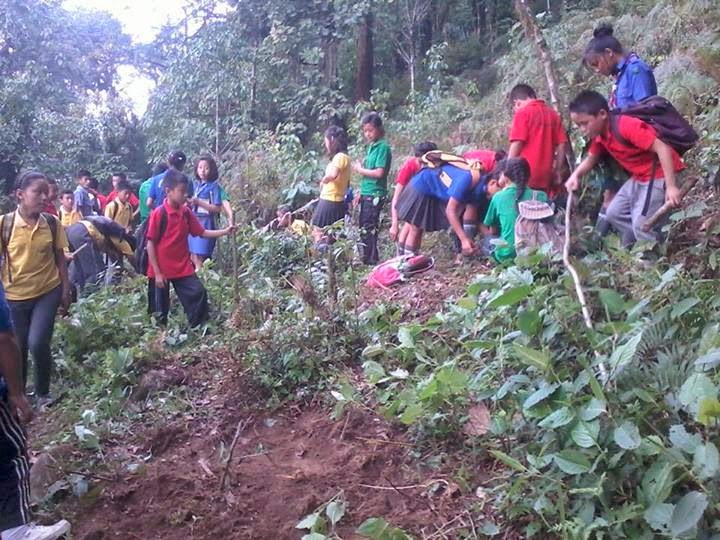 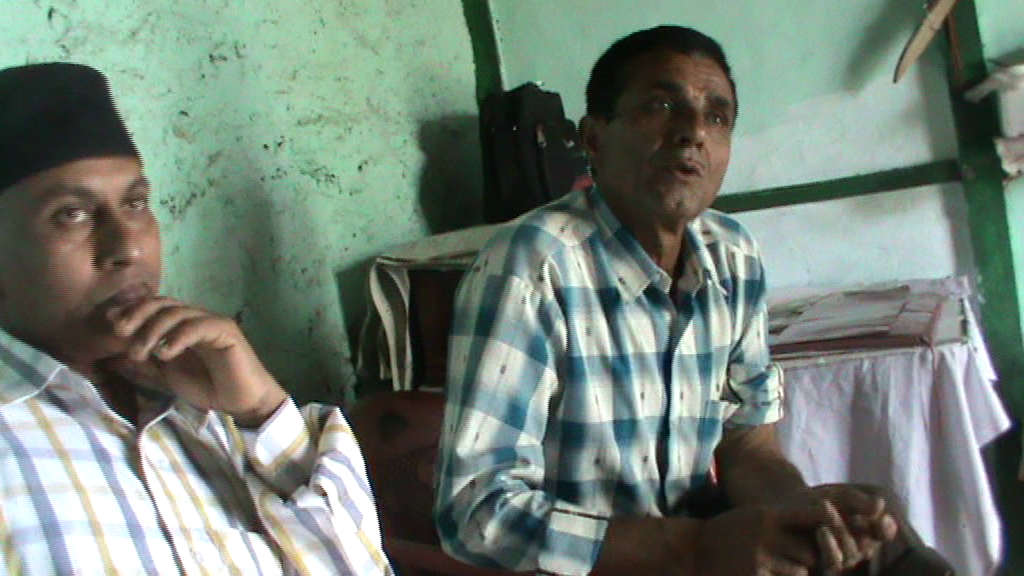 Diliram Sharma Neopany said, earlier days he used to regularly visit the forest and look for herbal plants but these days he have all the plants in his field. There was even time where he used to ask for plants from Chiwabhanjyang, he said. He talked about few names of the herbal plant that he had in his small field. Those plant included Hathjorra, Kaulo, Birray jhar, bhui champa, aleo vera and others that he used in his medicines. He has 31 herbal medicine used as powders that has to be eaten while 21 other herbal plants used during wrapping of the wounds.
According to this herbal practitioner, for a broken or fractured bone patient below 45 years it usually takes 18 to 28 days to be cured and for people above 50 years old it takes over one and half month. He shows his confidence and makes me believe that he had done this before. He made more positive approach when he said that he had cured patients with intestine related problems that do not need to be operated at hospital. Older the wound, lesser is the chances to be cured and he had treated old injured patients up to 3 years. He feels happy when people say that they had been benefitted from my treatment.
He narrated me a story of a patient who had fallen from a tee and had four broken bones from a rib cage and two more fractured. The patient was told to visit the hospital to take out the broken bones where the patient rang him up and told about his condition. Thereafter, Diliram Sharma Neopany called on the doctor and told him that he will cure the person in 28 days in which the doctor was also taken off. The patient visited Sharma’s residence and for 18 days he was not allowed to move and his whole body wrapped with herbal medicines.  Thereafter, little bit of walking exercise and after 28 days, Sharma himself took the patient to Kalimpong and did the X-ray. He was pleased to find that the patient had his broken rib cage treated without any operation. Today when he hear the patient say that he has been doing all village work without any difficulty, Sharma finds himself satisfied.
Interestingly, there are moments when some of the cases seem very difficult to handle and he does discuss with his other fellow herbal practitioner friends.. Neopany says, he is not into financial earning from his so-called passion. It was his interest, he choosed this social work and he is happy in it.  His only concern lies that how much will he survive, he just want to share his knowledge to person interested..
Subash Dahal, President Nav Jagriti Sangh, the local NGO from the village believe Diliram Sharma Neopany is an asset of the village and of the state. We had been supporting him since long time and when we are very proud of him and his work. When we see people related to ligament and bones problems visiting him and saving their money from visiting far off places, we believe it is more of a societal assist. Whenever we do census, we include his name as local Baidhya. We hope one day some sector from the government will come forward and help him to in a better way, Dahal went on to say.
at Monday, May 19, 2014 No comments: Links to this post 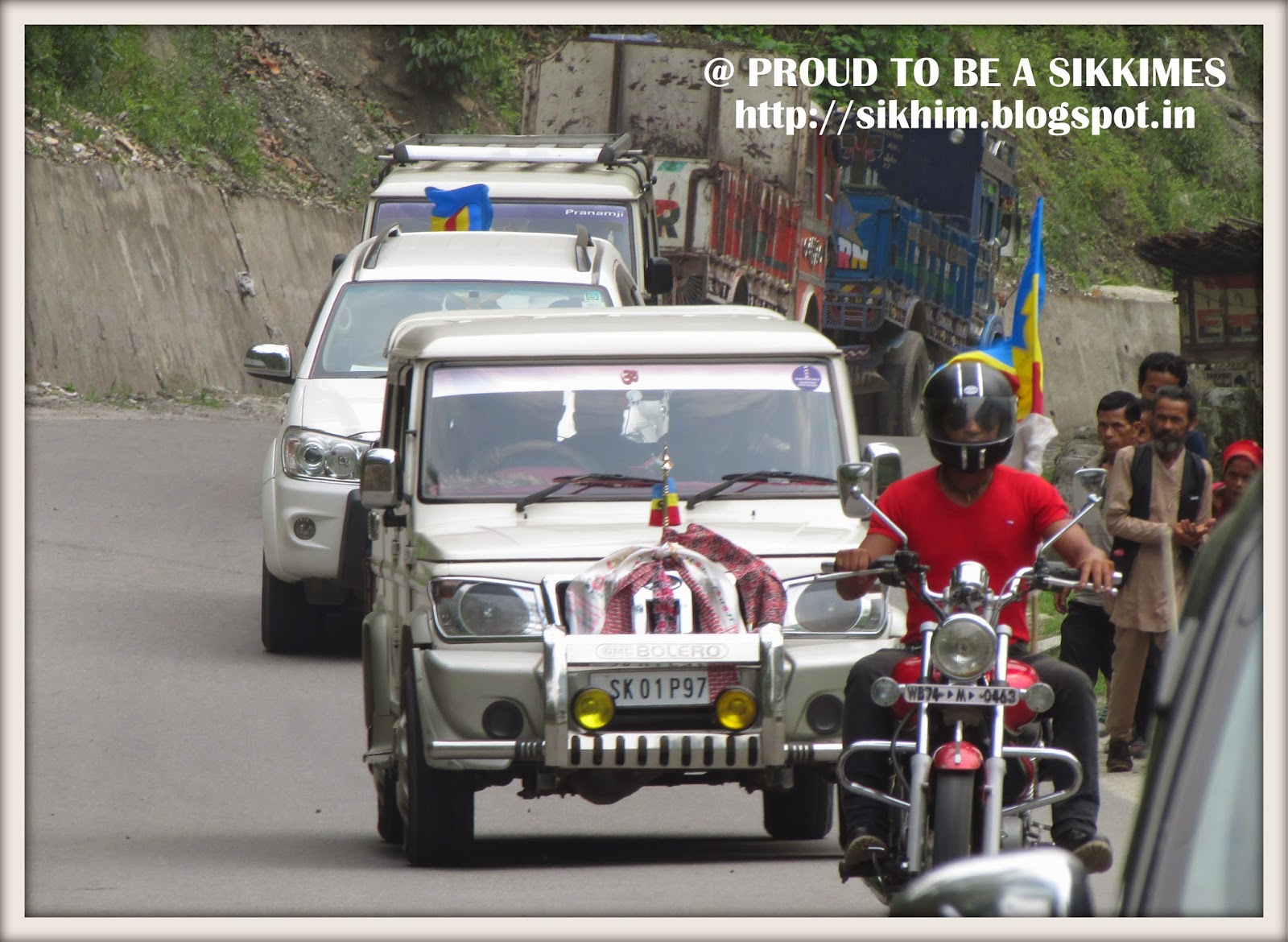 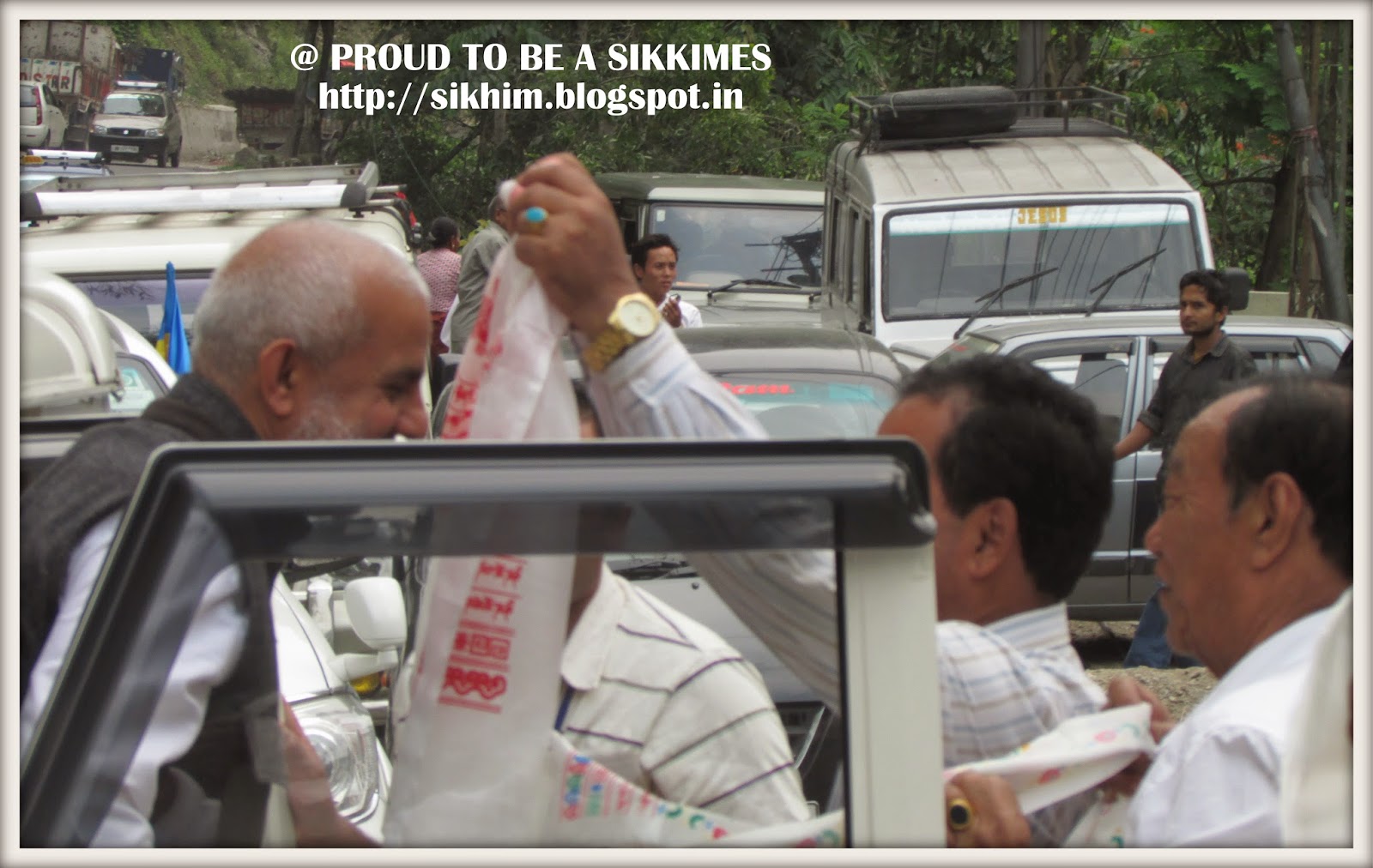 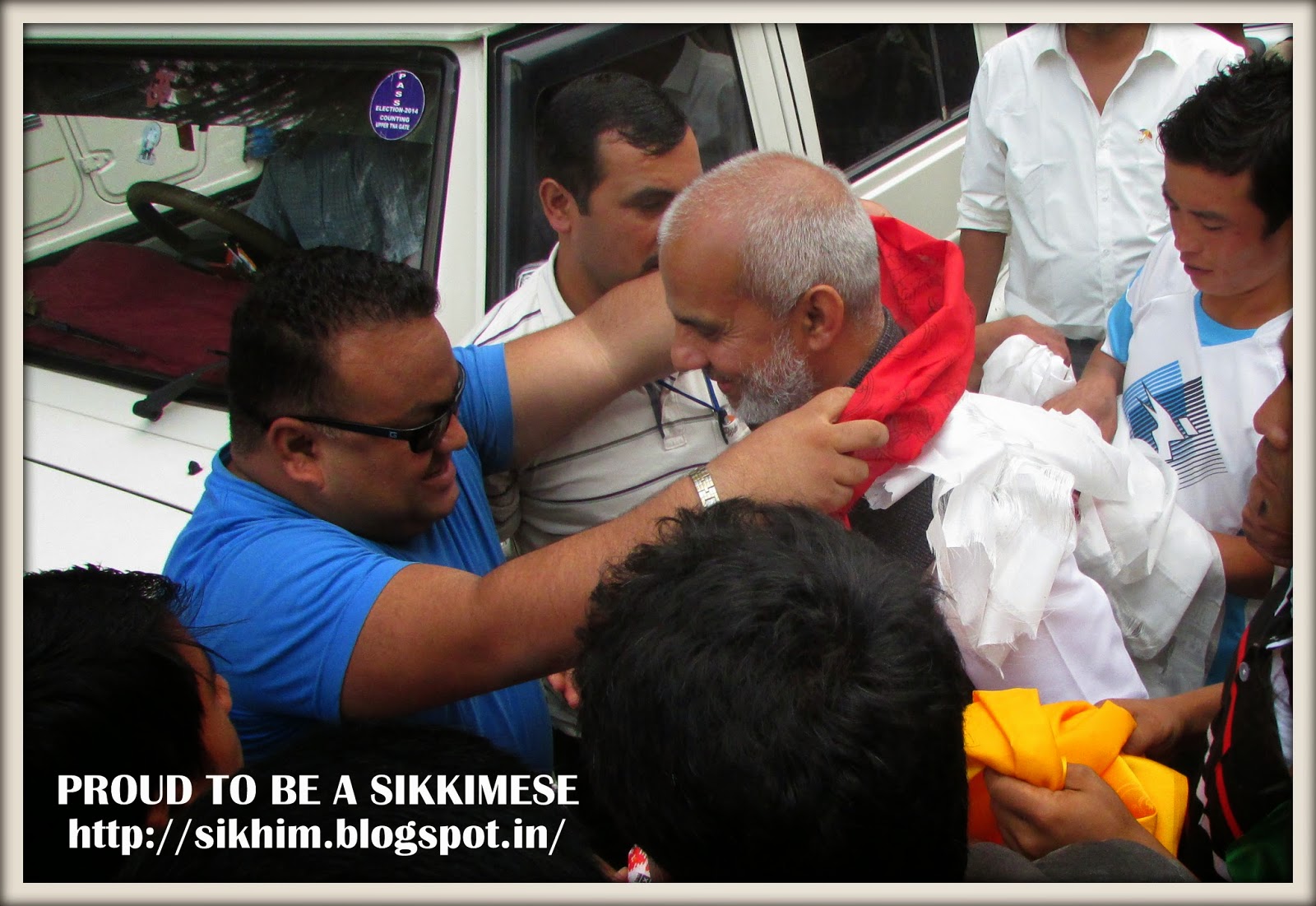 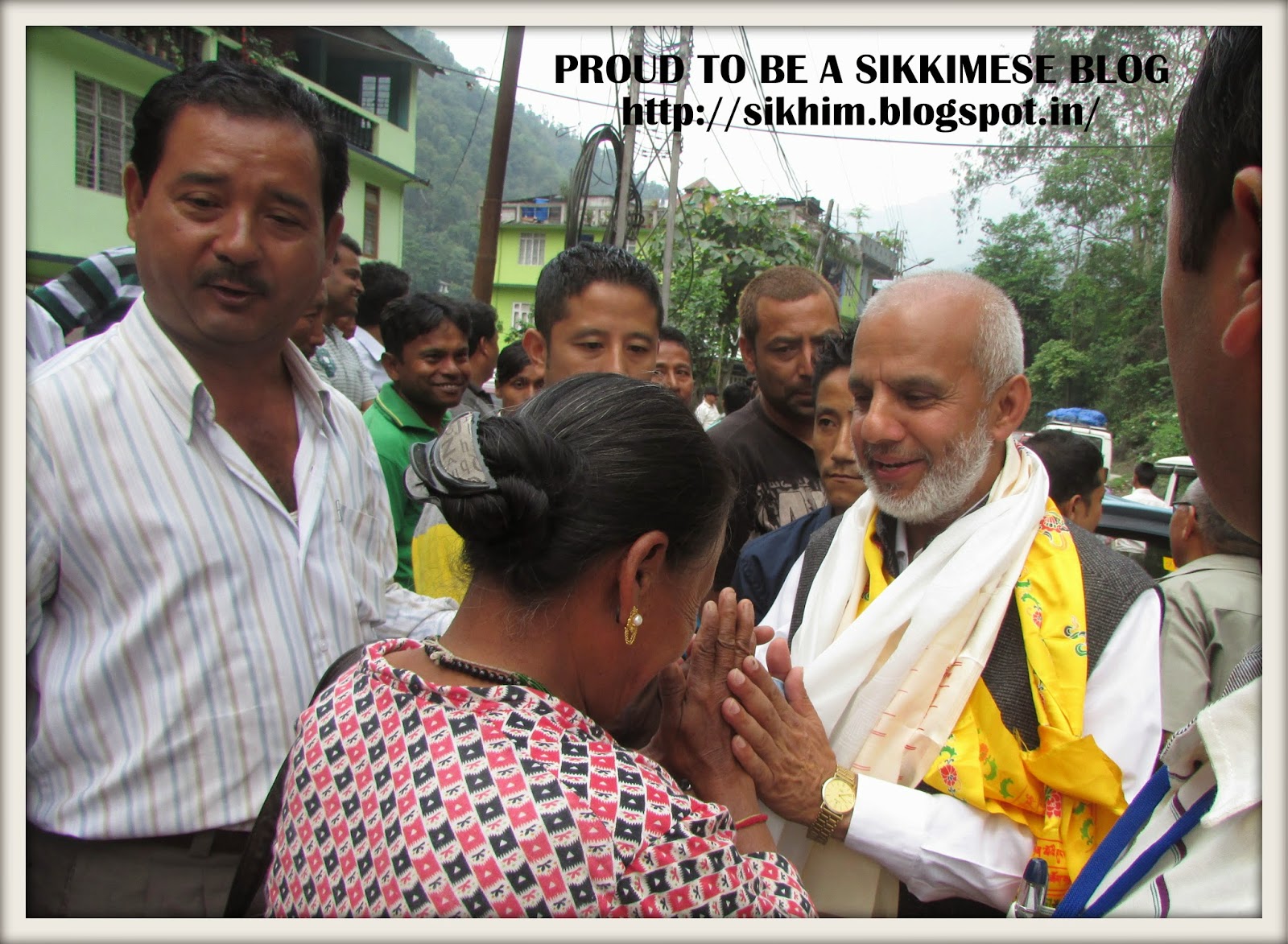 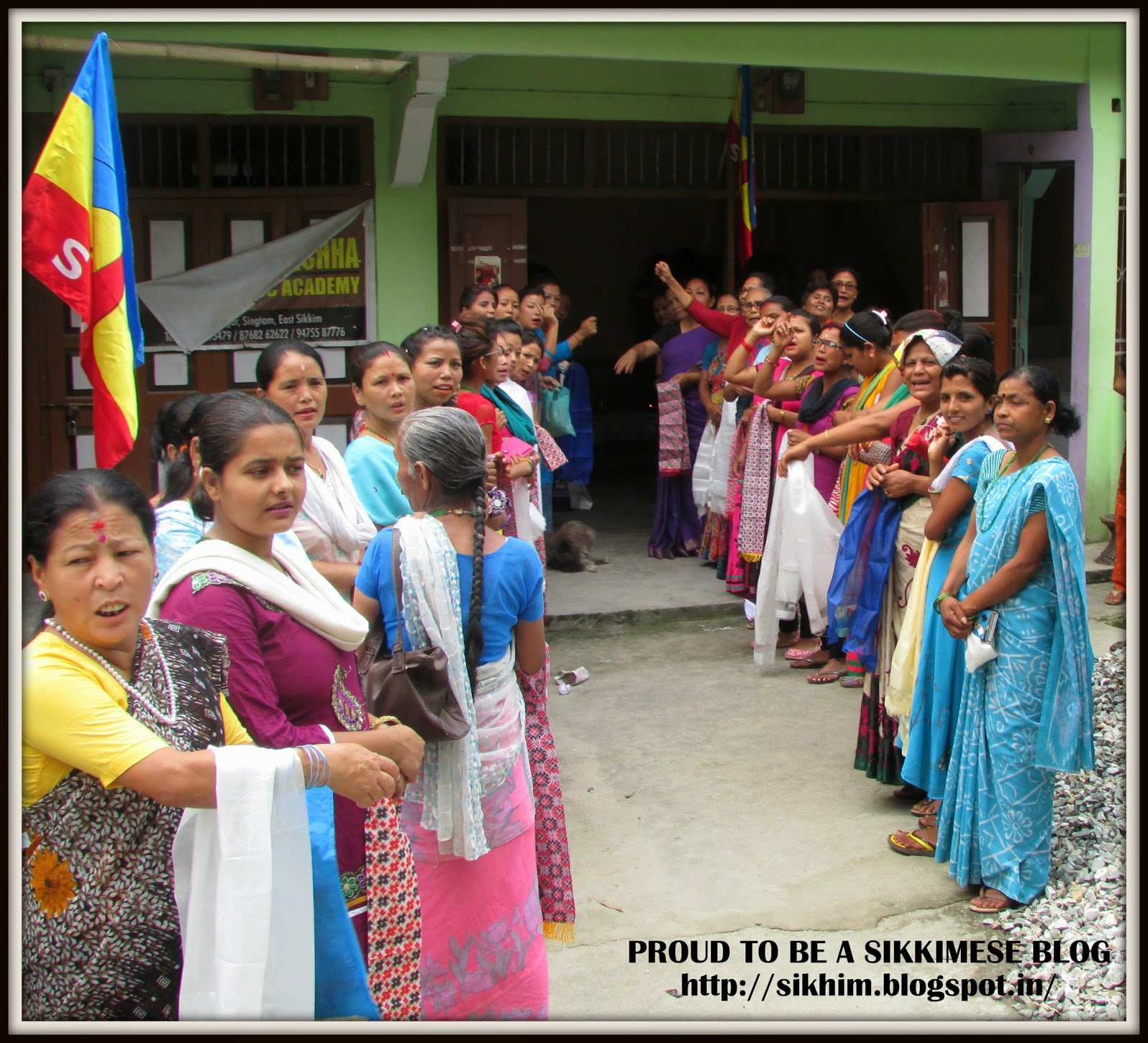 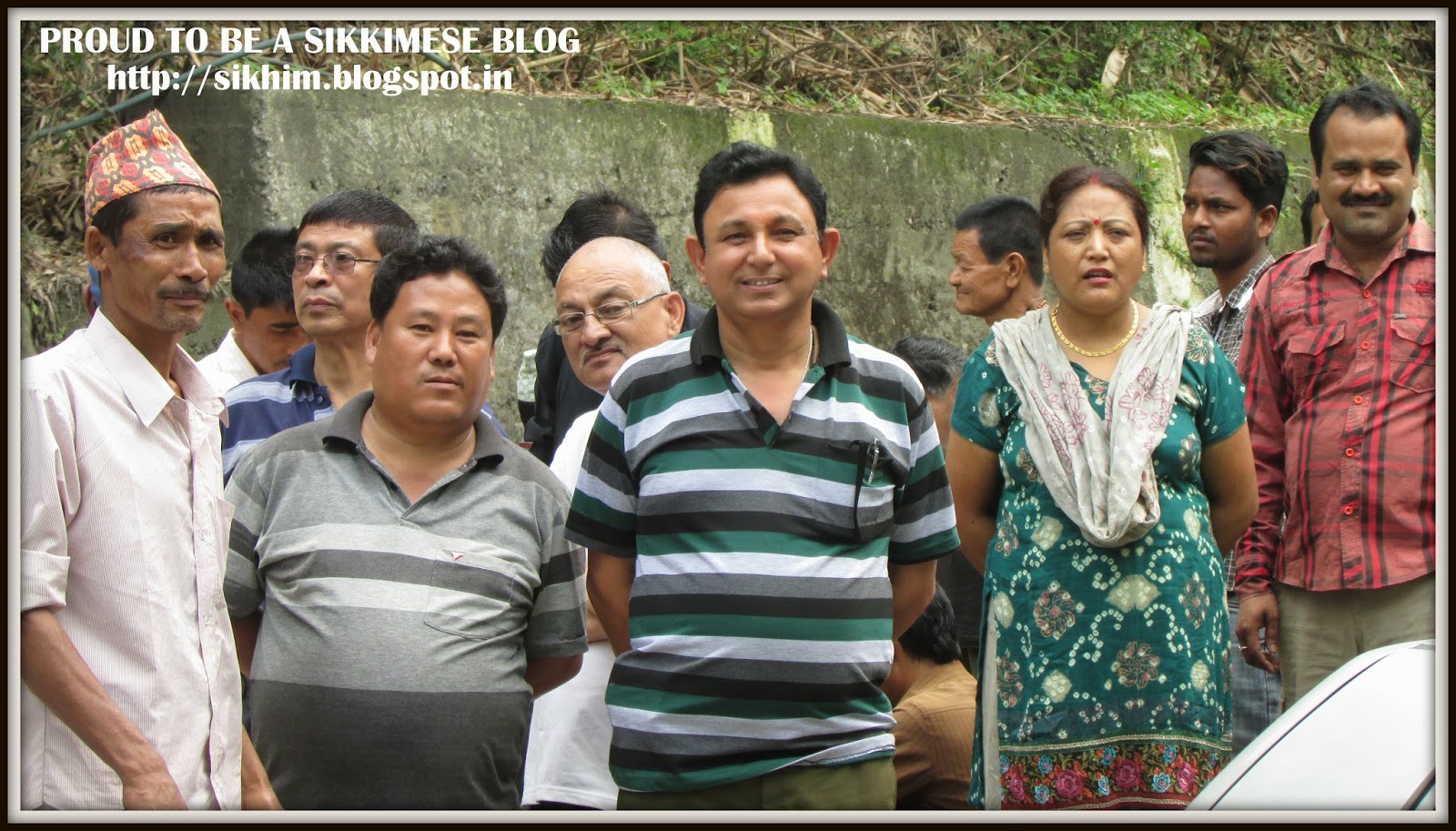 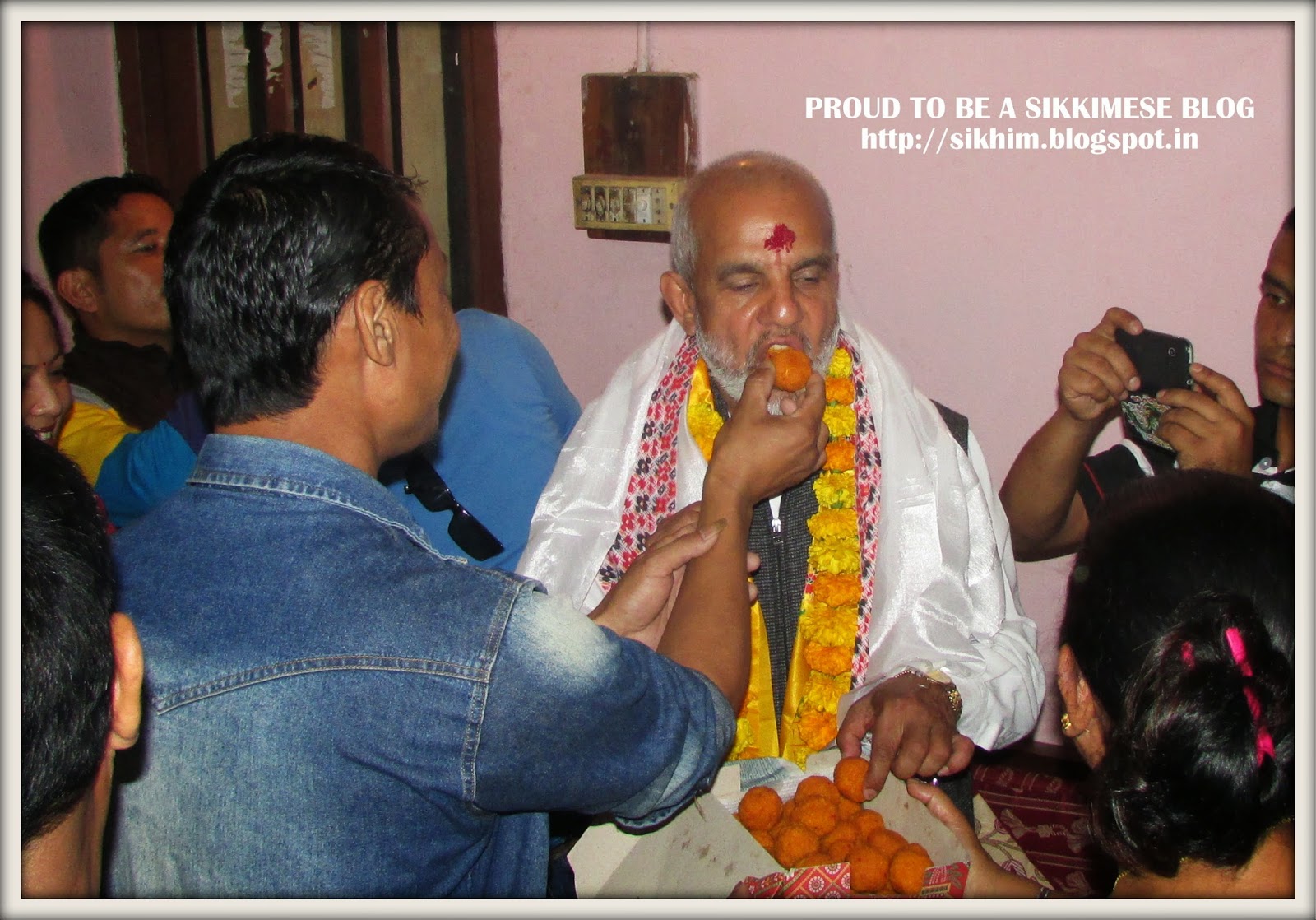 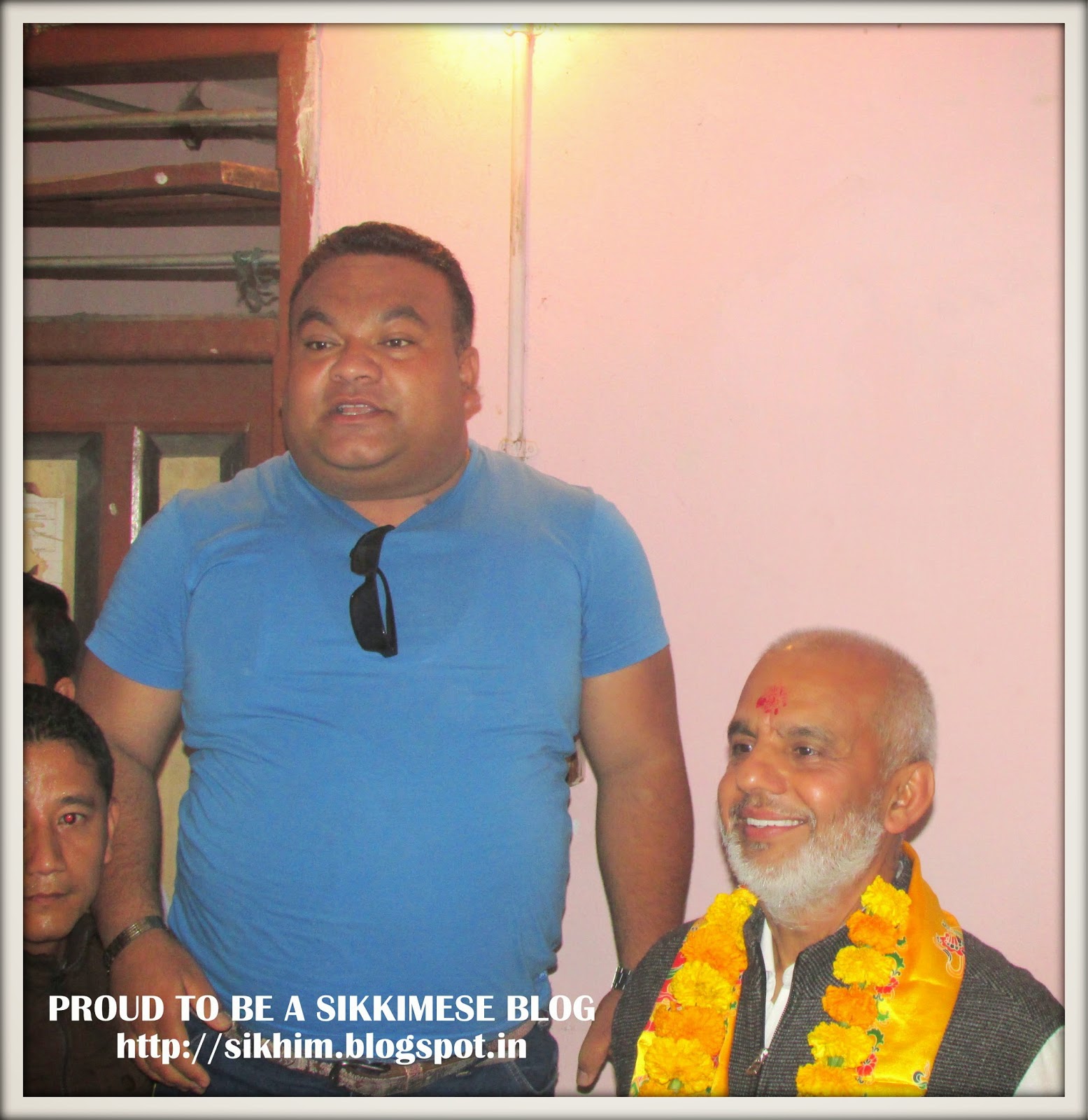 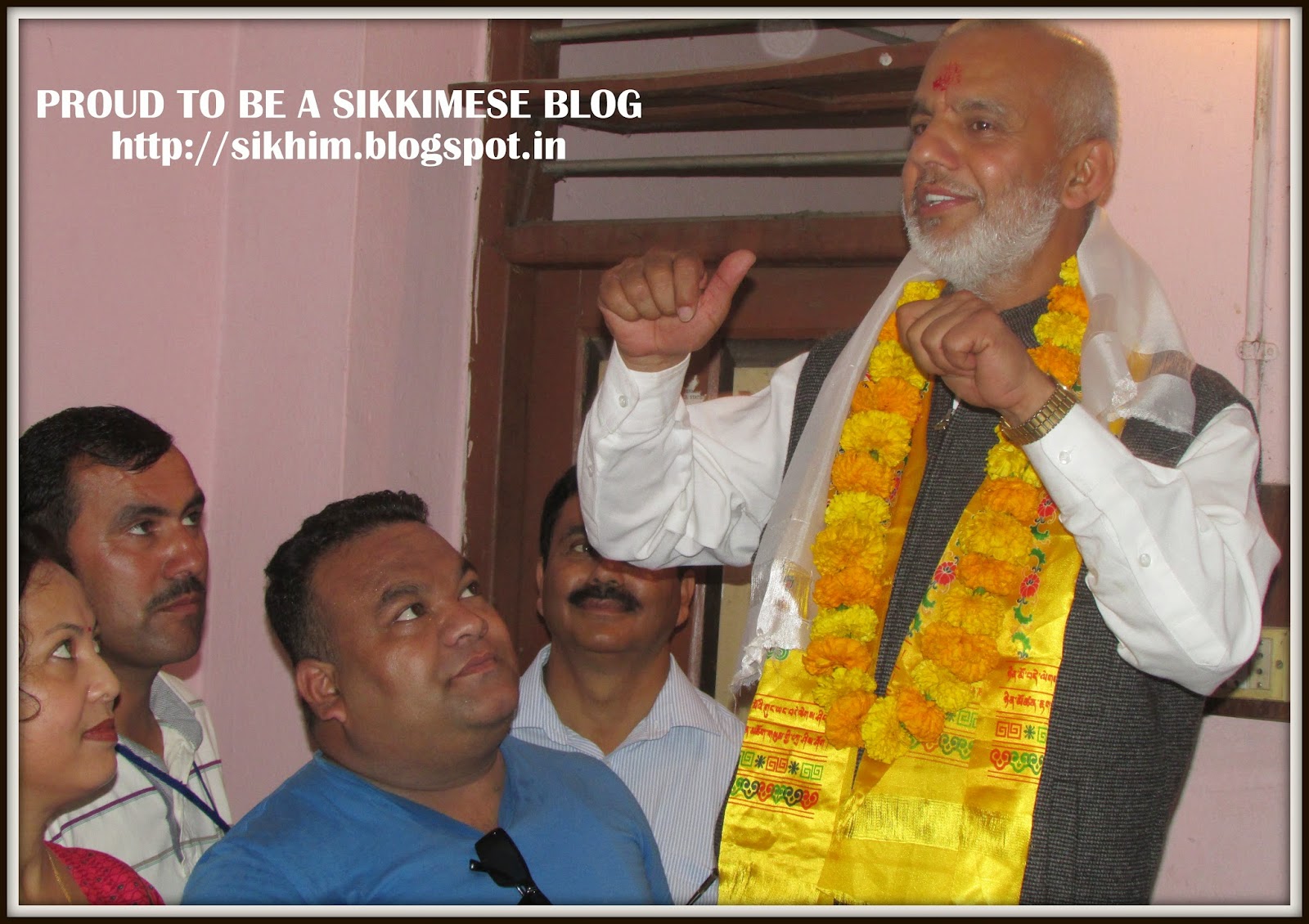 Email ThisBlogThis!Share to TwitterShare to FacebookShare to Pinterest
Labels: POUD 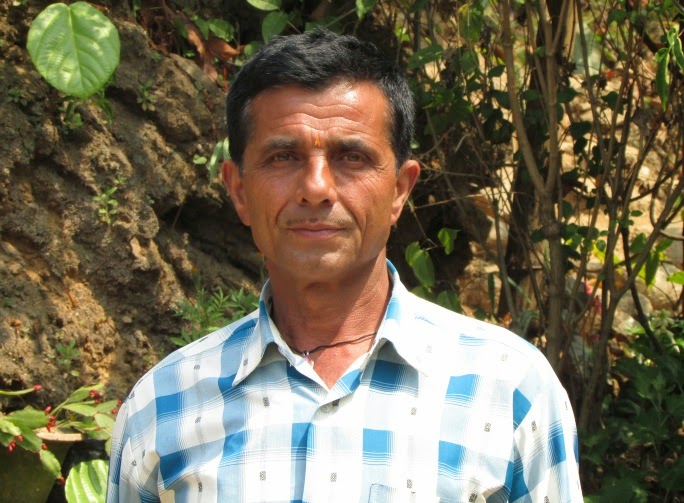 He started his fascination of curing broken bones complications some 18 years back and today with more than two thousand patients he has cured, he is an asset in his village. He enjoys helping people and to him it is his hobby to cure people that visit him with different types of broken bones related problem. Meet Diliram Sharma Neopany, aged 58, an herbal practitioner locally called ‘Baidhya’ from Aritar- Khamdong (Rhenock).
In a remote village of Aritar- Khamdong, he had been serving people for a long time and it is not the regular doctors that the villagers prefers but it is Diliram Sharma Neopany, who is much sought after. More or less, he has been helping his village people save their money from travelling far away from Aritar- Khamdong. Sharma never fails to look at the X-ray of the visiting patients before starting up his medication.
He has cured people from far-flung places of Yumthang, Lachen, Kalimpong, Kagey, Pedong, and Pabak to name few and there are places he had been called and he had never denied anyone, said Diliram Sharma Neopany. Believe me, he says he is illiterate and only can only write his signature. It is his interest that he collects book on different topics of herbal medicine and bones-related. He has someone read for him. He is of the school that had been doing best in the business with his practical experiences rather than a theoretical way. 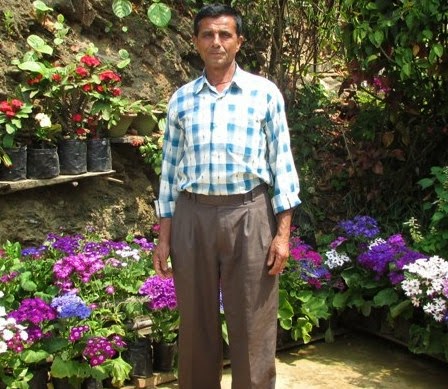 For Diliram Sharma Neopany, it all started in his early days at his home I used to have keen observation on my father and grandfather’s medicinal ability to cure farm animal’s broken legs. I had my first opportunity to carry out this medication on buffalo. I helped the poor animal get cure in fifteen days. Later on I also cured an ox during the rainy season.   It was a major success for me and few months latter I had a man from Sisney came to me with a broken arm. I had earlier done medical treatment to buffalo, ox, cow and goat, he person that arrived to me was in pain and in difficulty; he was not in a state to go to the hospital. I had no option and started my medication on him. In couple of week, he was able to do his regular work. I took him to the hospital to do an X-ray and when I found everything was fine thereafter only I left him of his own, Sharma recalls.
It was this moment that gave Sharma, a self confidence that he can cure human too. Later he went to meet Pakhrin, noted medical practitioner near Algarah. It was from Pakhrin; he stayed for three days and learnt about studying X-ray. Sharma gained more knowledge about bones and ligaments from him. Since then, he had never observed any patient without X-ray report. I believe X-ray is very important; I do not want to risk anyone’s life.
There had been many a time; he had send people to do X-ray with his own money. He have send people to Kalimpong, Singtam, Rongli and even few times he have gone with them. Sharma says, I am not into an earning business. It is my passion to serve my society, the patients that visit me offers me money but I do not charge any rate. I accept whatever they give me. Even if they are not able to pay anything, I give them money for their vehicle fare. I am the happiest when my patients get satisfaction from my healing, smiles Sharma.