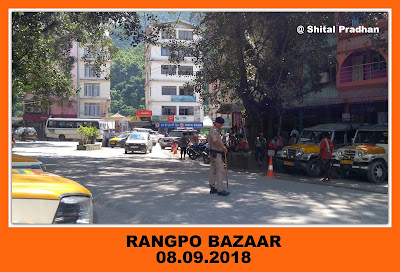 Rangpo is the border town between Sikkim and West Bengal at the Siliguri Gangtok Highway. It is the Gateway to Sikkim. At the border check post foreign tourists are required to verify their documents on their stay at Sikkim. The town is meeting place to two rivers - River Teesta and River Rongli chu
at Tuesday, November 27, 2018 No comments: Links to this post 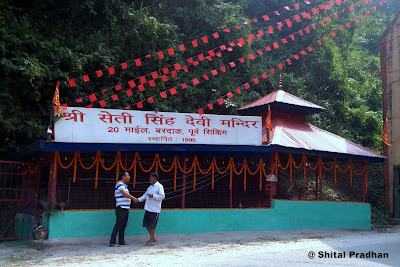 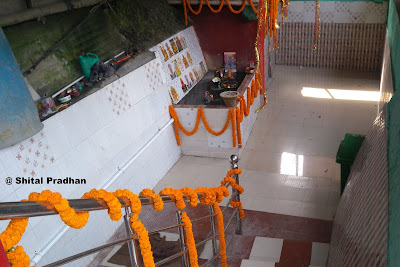 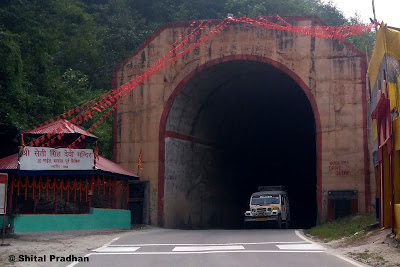 Seti Singha Devi Mandir, Bardang is a road-side hindu temple near Singtam. It is 3 km from Singtam on the Rangpo-Singtam Highway adjacent to the Bardang motorable tunnel. The temple was set up in 1996. The mandir committee regularly holds religious program at this temple.
at Tuesday, November 27, 2018 No comments: Links to this post

Jawaharlal Nehru at Rangpo on his visit to Sikkim (1958) 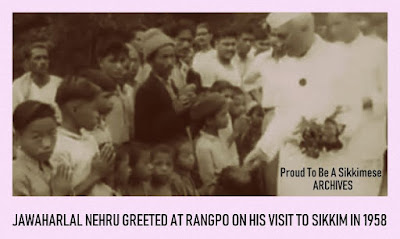 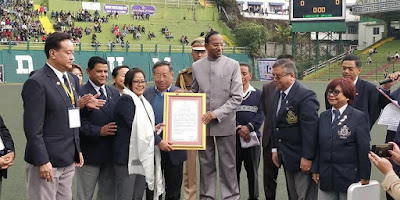 Meet Smt.Puspa Chettri (Gurung) the first women International player from Sikkim. She had represent Sikkim and country in many International football tournament. She got felicitated by Sikkim Football Association (SFA) along with many other prominent football players of Sikkim by His Excellency the Governor of Sikkim on the occasion of 38th All India, Governor's Gold Cup International Tournament. She is a legend of Sikkim football. (Source: Barap Namgyal Bhutia)
at Sunday, November 04, 2018 No comments: Links to this post 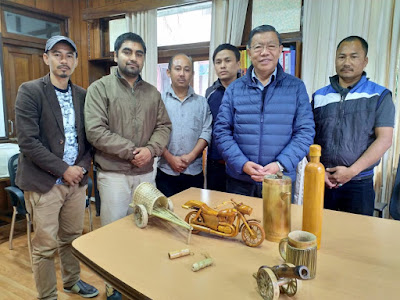 3 October 3018, Gangtok: Bansi Das Limboo, Aitey Raj Subba, Chandan Chettri, Yam Parsad Subba, Pravin Chettri and Amrit Sharma, representatives of Chalamthang Eco-village Tourism Development Society, call on Member of Parliament (Lok Sabha), Shri P.D. Rai after completion of training course on Primary Bamboo Processing Machine Operation & Maintenance at the Cane and Bamboo Technology Park, Burnihat, Assam.
They thanked the MP for urging the Union Agriculture Minister, Shri Radha Mohan Singh, to expand the National Bamboo Mission (NBM) under National Mission for Sustainable Agriculture (NMSA) to Sikkim, following which the programme was extended to the state.
Prior to the launch of this Mission, Shri P.D. Rai was the first parliamentarian to bring a Private Member’s Bill to amend the Indian Forest Act 1927, wherein Bamboo is redefined as a ‘grass’ from a ‘tree’ which would open a lot of possibilities for business and processing.
Under the NBM, a first instalment of Rs. 17.25 lakhs (SCSP Category), Rs. 70.95 lakhs (TSP Category), Rs. 256.25 lakhs (General Category) has been released to the State Government of Sikkim as a Central Share during 2018-19 for implementation of the programme.
Mr. Rai congratulated the Chalamthang Eco-village Tourism Development Society for the successful completion of the training course and expressed hope for the NMB to be carried out with full vigour in the state.
at Sunday, November 04, 2018 No comments: Links to this post 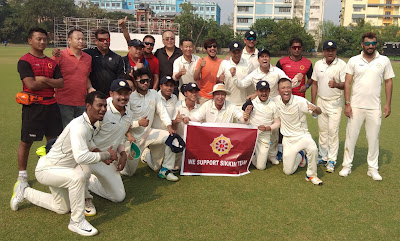 PRESS RELEASE
Sikkim wins their first ever Ranji Trophy Match against Manipur in Kolkata today by an innings and 27 runs. The match was played in JU Second Campus, Salt Lake, Kolkata. Sikkim with 8 others team are playing their first Ranji Trophy in a Plate Division.
It was Milind Kumar’s 261 runs that helped Sikkim reach 372 in the first innings and a brilliant bowling by Sikkim bowlers restricted the opponent on 79 runs, in which Ishwar Chaudhary took 4 wickets, Bipul Sharma 3 wickets, Lee Yong Lepcha 2 wickets and Palzor Tamang 1 wicket.
Sikkim decided on a follow on to Manipur and in the second innings they scored 266 runs, Yashpal Singh’s 132 and Lakhan Arjun Rawant’s 70 runs helped them reach this score. In the second innings too Sikkim showed a magnificent game temperament and sweep-out Manipur with a short fall of 27 runs on the board. Bipul took 4 wickets, Ishwar 3 wickets, Plazor, Milind and Padam 1 wickets each and helped Sikkim to this win.
It is a historic win by Sikkim and a proud moment for all the Sikkimese. Sikkim scored 7 Point(s) on the table of Plate Division of Ranji trophy.
“I congratulate the entire team for this historic win today and would like to thank all the past Office Bearers of SCA, who worked tirelessly for this day to come. It is every Cricketers dream to play in the most prestigious tournament of Indian Domestic League and with this win their dreams have been fulfilled. This dream SCA and BCCI has finally fulfilled for all cricketers in Sikkim. Today’s innings defeat has been given to the people of Sikkim by the players and the SCA family, says Lobzang G. Tenzing (President of Sikkim Cricket Association).” 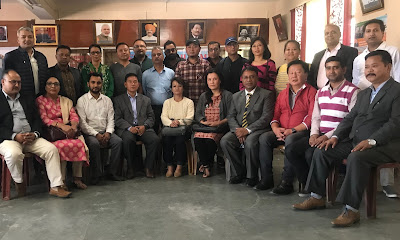 31st October 2018: The Association of Xaverian Alumni (AXA) in association with Lions Club Gangtok organised a Free Health Camp at Gram Prasasan Kendra hall at Pakyong Bazar on 31st of October 2018. The Doctors and Specialists from different field like Medicine, Psychiatry, ENT, Gynaecology, Neuro-surgery, Orthopaedic and General physician were present. The Eye section was taken care by the Doctors and Technicians of Siliguri Greater Lions Eye Hospital.  Entire logistics at the venue was arranged by the Pakyong chapter of AXA. Medicines were provided by CMS, Health Care Human Service and Family Welfare Department and Cipla Foundation.
More than 400 people registered for the medical camp and got necessary medical advice. The response was overwhelming and the Association feels the need to hold such camps at regular intervals. On behalf of the AXA, we thank all the Doctors and Technicians from STNM Hospital and other places as well as Siliguri Greater Lions Eye Hospital their support in making the event a huge success. We thank CMS and Cipla Foundation for providing the much needed medicines. We also thank all the Panchayats of GPK Pakyong for providing the support.
at Thursday, November 01, 2018 No comments: Links to this post