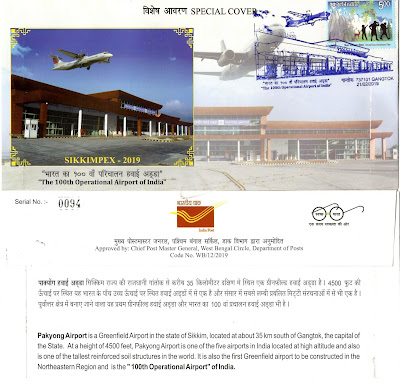 Special Cover on Pakyong Airport that was the 100th Operational Airport of India was released on the inaugural day by Ramtanu Shah, Airport Director, Pakyong. Royal Coronation throne of Norbugang, Yuksom was featured on a special cover released on next day by Dr. Anira Phipon Lepcha, Assistant Professor, Department of History, Sikkim University. Both the covers were designed by Singtam based philatelist Roshan Prasad. 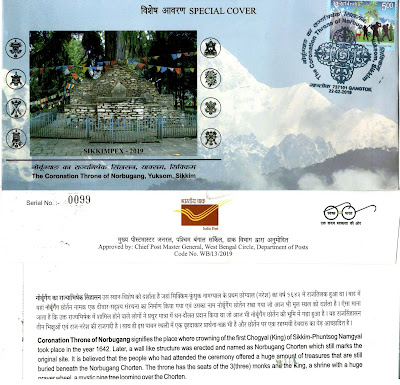 Philatelic exhibition was held at Sikkim after ten years. Twenty one philatelists from different parts of Sikkim, Darjeeling and Siliguri had participated at the exhibition. Those philatelists were members of Sikkim Philatelic and Numismatic Society.  Souvik Roy and Eeshita Basu Roy from Kolkata were among the invited philatelist. 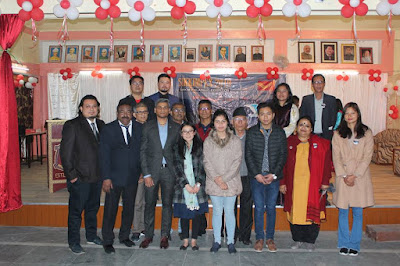 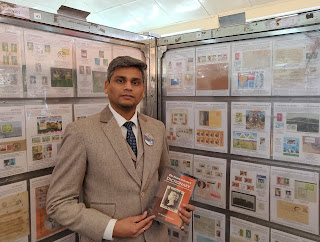 The other major highlight of the two day event was a book released on dictionary of stamps. ‘The Stamp Collectors' Dictionary’ written by Roshan Prasad and published by Sikkim Postal Department was released on the first day. Vivek Yonzone from Darjeeling conducted philatelic workshop that was appreciated by students and crowds present. There were Quiz competition, Letter writing competitions and drawing competitions was organised for the school students.

Two days SIKKIMPEX 2019 ended in a happy note and I would like to thank every individual involved in making the event a success. 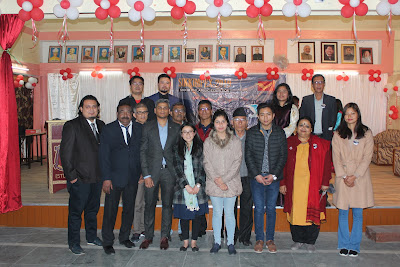 But sad to say not everyone is happy with this reborn Sikkim Philately. I did not wanted to write on this topic but being associated with Sikkim Philately since last twenty years I could not stop myself.

Since last few days, I have received many calls from philatelists from different parts of India complaining about Sikkim philatelists being invited to other exhibitions but them not being invited here this time. And why and how was a stamp collector from Kolkata only invited? Please don’t make politics on it. Please don’t create controversy. We are stamp lovers and we are not interested in phila-politics. What do you expect from us where we have only three genuine stamp collectors since last twenty years?

SIKKIMPEX 2019 was a non competitive exhibition for the Sikkim’s philatelists. Members of Sikkim Philatelic and Numismatic Society were the only participants at the exhibition. And they were only twenty one participants. Except for me, Ganesh Pradhan, Roshan Prasad, Deepen Pradhan and CP Raya, most of them were new collectors. It was decided by the Postal Department to invite a senior philatelist as an invitee guest whom they decided to call upon Mr. Souvik Roy and her wife Eeshita Basu Roy from Kolkata.

Sikkim is preparing to re-start promoting philately in the state; it was a need of time for every philatelist across the country to support us. But I am very sad to hear all these unwanted troubles. Sorry to say, I am deeply hurt!! 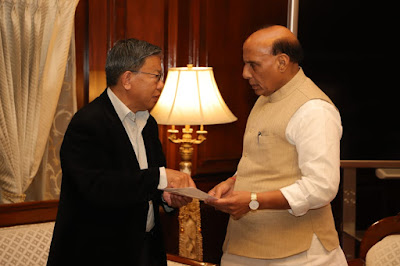 New Delhi 19 February: Shri P D Rai, Sikkim’s lone Member of Parliament, Lok Sabha, Tuesday called on Hon’ble Minister of Home Affairs, Shri Rajnath Singh,  at his office and conveyed the state’s and Chief Minister Pawan Chamling’s unstinted support and commitment to the government over the heinous terror attack on a CRPF convoy in Pulwama, J&K that resulted in the loss of lives of over 40 jawans and the destruction of their families.

Shri Rai conveyed that the ruling Sikkim Democratic Front (SDF) has always supported the Government and the NDA/ NEDA unconditionally as has been advocated by party president, Shri Chamling. He said the SDF fully supports the stand taken by the Government to counter the terrorist activity that has resulted in a huge loss of lives of our brave jawans at and the people of Sikkim stand with the nation and the families of the Jawans.

He formally informed Hon’ble Minister of CM Chamling’s announcement made on 17th February of an ex gratia payment of Rs. 3 Lakhs to the families of each martyr of the terror attack and the commitment of providing free education in Sikkim to the children of these martyrs if the family desires. He urged the Hon’ble Minister to convey the commitments of Sikkim government to the bereaved families.

Expansion of the Sikkim State Assembly and granting of Tribal Status to Eleven left out communities discussed, among other important issues like North Sikkim Disaster Management Scheme
New Delhi 12 February: The Members of Parliament from Sikkim, PD Rai Lok Sabha and Hishey Lachungpa Rajya Sabha, called on the Hon’ble Minister of Home Affairs, Shri Rajnath Singh today in his office. They briefed the Minister on a number of issues. 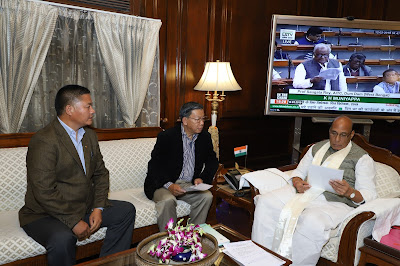 First amongst them was the demand of expanding the Sikkim State Assembly from 32 seats to 40 seats and giving 5 seats reservation to the Scheduled Tribes of Limboo and Tamang, which is at the stage wherein Cabinet approval is needed. This demand has been consistently brought up by the Sikkim government and hence they requested that if it is not possible to introduce a bill during this session of the Parliament an ordinance must be promulgated by the Government for the same. Similarly, they presented the issue of giving Tribal Status to the eleven left out communities from Sikkim under the aegis of the 371 F provisions of the Constitution of India. For this, they submitted a copy of the proceedings from the Sikkim Summit for Tribal Status 2018 held last year.
Further, they informed the Hon’ble Minister about the heavy damages suffered by Mangan Town and the surrounding areas during the heavy monsoon rains between 9th to 16th September 2018 which caused extensive damage to various infrastructures including roads, especially North Sikkim Highway only road to China Border, water supply, schools, power lines, public and private buildings, etc. If immediate mitigation measures are not implemented the Mangan town and NHS road may not endue the next monsoon. The Detailed Technical Report (DPR) for the same was cleared by the Technical Evaluation Committee (TEC) of National Disaster Management Authority (NDMA) and has been forwarded to the Ministry of Home Affairs, Government of India for final approval and sanction. Hence, they requested the Hon’ble Minister to expedite the approval and sanction of the DPR for Mitigation of Mangan Landslide at the earliest to enable Sikkim State Disaster Management Authority (SDMA) to initiate the implementation of the mitigation works during the dry winter season (December to April).
Two memoranda discussing the above issues in detail were submitted to the Hon’ble Minister in his office by the MPs.
The MPs also submitted a memorandum to Hon’ble Defence Minister Smt. Nirmala Sitharaman to demand permanent restoration of troubled spots on North Sikkim Highway (NSH) and to release remaining compensation between Rangrang – Mangan acquired by Border Roads Organisation under Zimchung revenue block NSH.
at Friday, February 15, 2019 No comments: Links to this post 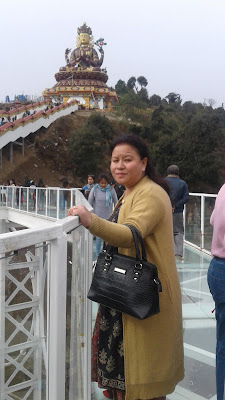 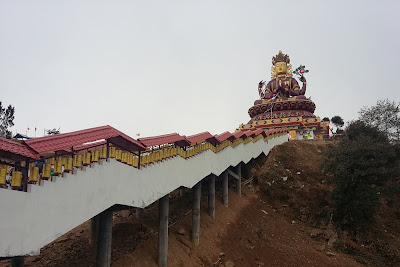 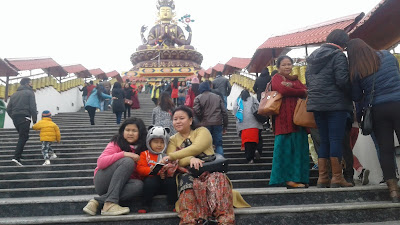 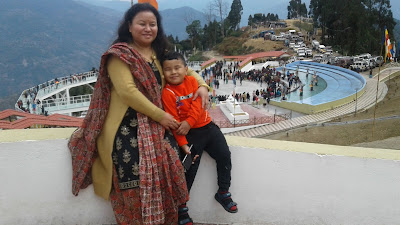 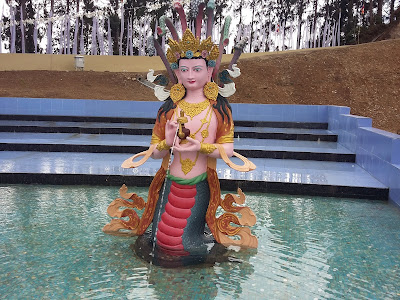 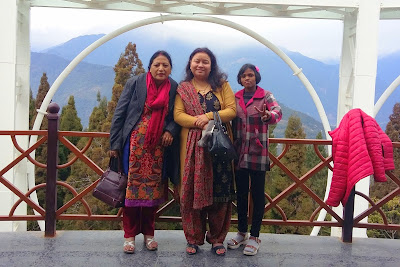 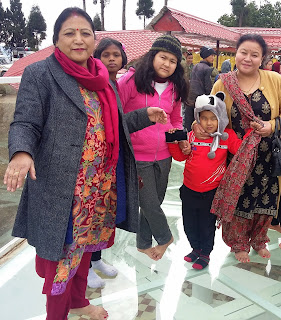 The opening of the 98ft 'Cherenzig Shingkham Riwo Potala' near Pelling, West Sikkim marks the completion of the statutes of three principal Buddhist deities in Sikkim. The other two being the Buudha Statue at Ravangla and Guru Padmashambha Statue at Namchi, both in South Sikkim. The Cherenzig complex spread over 8.5 acre of land have a sky-walk - a stair case, water body with the magnificent eight- serpents (Klu- Chen- Gyet) and religious artifacts.
A plaque of Cherenzig Shingkham Riwo Potala was officially inaugurated by the Chief Minister Shri. Pawan Chamling in presence of His Eminence Gonja Rinpoche and His Eminence Lachung Rinpoche on November 2, 2018. The total height of the statue from the base of the pedestal on which it is mounted is 135ft while the statue is 98 ft. There is a fleet of 100 stairs leading to the foot of the statue. This is the world’s tallest Cherenzig Statue.
According to the THE TELEGRAPH, Gary Chopel, the lead architect of the building and housing department and chief executive officer of the project, said it took nine years to complete build complex. “The cost of the project is about Rs 70 crore. In the first phase, we have completed 80 per cent of the work. The remaining 20 per cent will be taken up in the second phase,” he said.
at Thursday, February 07, 2019 No comments: Links to this post