SINGTAM, NOVEMBER 25: Members of Alpine Philately and Numismatic Society (APNS), Darjeeling - Mrs. Nilema Yonzone, Mr. Anand Yonzone and students of North Point Academy, a school in Singamari, Darjeeling won 2 bronze medals and a Special School Collection Prize at the State Level Philatelic Competition WEBPEX ‘Ekla Chalo Re -2019’. The 6 days exhibition was held at the Academy of Fine Arts, Kolkata from the 16th to the 21st of November 2019. 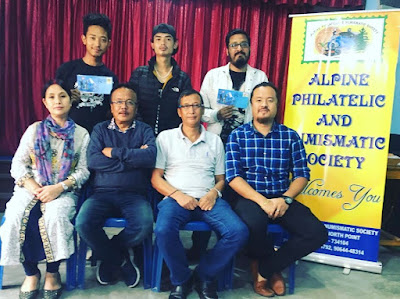 The two Philatelists representing APNS won bronze medals with their thematic Philatelic exhibits titled ‘Woman Empowerment’ and ‘The Postal System’ under single frame category. Students of classes 4 and 5 of North Point Academy (NPA), Darjeeling also won Special School Collection Prize for their collective school collection. NPA has an active Philately Club run under APNS and this is their second achievement after the District Level First Prize won at KALIMPEX in 2018.
‘APNS, formed with the sole motive of  promoting intellectual hobbies amongst the youth, to keep them away from the ill elements of society, especially mobile phone addiction has headed the right direction’ said Vivek Yonzone, the Secretary, APNS. He congratulated all the winners at the WEBPEX.
‘The Society takes pride in what it has achieved in just a period of a year since its inauguration and we plan to influence more people, help more schools run Philately and Numismatic Clubs’ added Vivek. He thanked the Postal Department and everyone involved in organising such events and also for helping APNS in many ways.
at Monday, November 25, 2019