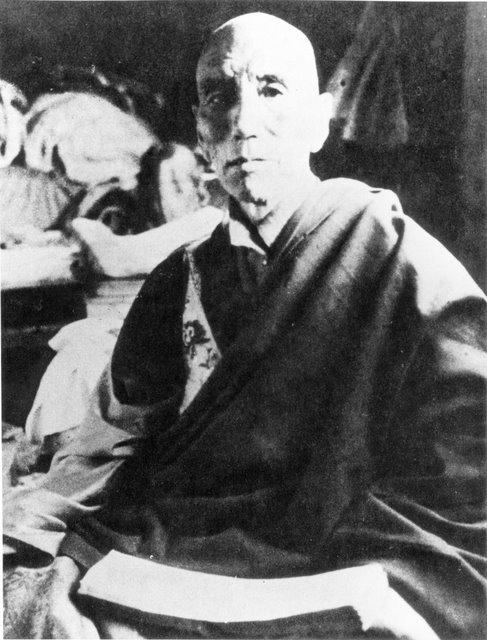 Volker Dencks, a Frenchman contacted me from my blog ‘Proud to be a Sikkimese’ and was sharing with me about the great Tibetan teacher in Jamyang Khyentse Chökyi Lodrö. He said there were various biographies floating in internet, but they don't say much about Jamyang Khyentse Lodro's time in Sikkim. He further added he was sending me some information about Jamyang Khyentse where he needed my help.

The blog ‘Remembering the Masters’ on Jamyang Khyentse writes; in 1955/56 Crown Prince Thondup Namgyal travelled to Lhasa with a special mission on behalf of India's Prime Minister Pandit Nehru: An invitation for His Holiness the Dalai Lama to join the celebrations for the 2,500 year anniversary of the birth of Buddha, which would enable him to forge international alliances, drawing attention to the threats his people was facing. At the same time Jamyang Khyentse Chökyi Lodrö and his party had arrived on their pilgrimage and secret flight from Kham and had taken up lodging at the Samdrup family home, right across from the Jokhang temple. Coincidentally the prince's first wife, Sangey Deki, was a member of the Samdrup family, and so Thondup Namgyal met Jamyang Khyentse at Samdrup Podrang, inviting him to join in the great Buddha Jayanti, via Sikkim.

According to the information send by Volker, Jamyang Khyentse arrived from Tibet in 1956 apparently through Lachen via the Sebu Pass. He had been invited by the Chogyal ( Here he assumes it could be Chogyal Palden Thondup Namgyal who was then the crown prince) to stay at the Royal Chapel, but since this was being prepared for the arrival of HH Dalai Lama, he stayed at the  Maharani’s home also named as Takste Palace.

Jamyang Khyentse and his party left shortly after their arrival to go on a pilgrimage for Buddha's Jayanti in India and Nepal. Apparently they took a Dakota Cargo Plane from a place called Rakso (or similar) to fly to Kathmandu. The plane was extremely simple and they had to tie themselves down with ropes during the flight. They returned from their pilgrimage shortly after HH Dalai Lama had left around Losar 1957. After that they stayed at the Royal Chapel. From 1957 until 1959 he moved frequently between Gangtok, Darjeeling and Kalimpong and to accommodate his deteriorating physical condition. He stayed at Cooch Bihar House (the Maharaja's Palace at Darjeeling), at Arunachal House and at Panorama Cottage, gave teachings at the Bhutanese Gompa and the Tamang Gompa in Darjeeling.

During this time he gave many teachings and empowerment to Tibetan as well as lots of foreign students. Among them was a French man who worked as the Chairman for the “Sikkim Relief and Re-habilitation Committee for Tibetan Refuges". His name was Robert Godet. He had traveled to Sikkim from France in a small two seater air craft called 'La Peniche' [that means little boat in French]. Shortly after Jamyang Khyentse passed away in 1959 he crashed his plane and died, somewhere in Sikkim. In Sikkim Apa Pant, the Indian Ambassador, became a student of Jamyang Khyentse.

Sometime in 1958 or early 1959 All India Radio interviewed Khyentse Rinpoche and recorded a puja. This could be the only audio recording that exists. Also, when Nehru came to Sikkim in September 1958 he was accompanied by an Indian Television crew and some claim that there was a 10 second filmed segment featuring JKCL. I never had any idea whether his arrival in Sikkim was ever reported in any newspapers at that time or even I find it very difficult to answer about any video footage Volker had requested. But with information provided by Volker I wish if there is any audio recording about the great leader available at Gangtok AIR archives it would be more of a help to share with rest of the world.

Jamyang Khyentse passed away in June 1959 in the Tsuklakhang - a few weeks short of 50 years ago. It was interesting to note that there was a gentle earthquake just before his death and three days after his death people had reported seeing a very strange incandescent light that illuminated all of Gangtok, way past sunset. His body was kept in the heat of summer for over six months, as lamas from all over Tibet and India came to pay their respects. During this time the body showed no signs of decomposition. Towards the end of 1959 he was cremated at Tashiding. The ceremonies lasted several months led by Dodrubchen Rimpoche of Deorali and Dilgo Kyentse Rimpoche. His stupa in Tashiding had been gilded entirely in 1990.

The narrative send by Volker was of immense importance for me towards my study in understanding Sikkim and I am sure in days to come I shall return with vivid information about Jamyang Khyentse. I wish to help Volker for trusting me that I might be of help to him and his foundation.